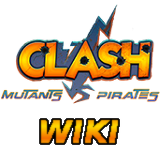 the Clash: Mutants vs Pirates guide for Characters, Skills, Skins and more written and maintained by the players.

Please feel free to contribute by creating new articles or expanding existing ones.

About Clash: Mutants vs Pirates

In this new 3rd person shooter MOBA, Space Pirates are invading earth, but due to a sinister experiment, the human population has turned into well-fortified Mutants. These two factions are now in a stand-off about, who has the greater Champions. CLASH is coming with four Classes and six champions to start with, but two more are currently developed. Five players can play against each other in two opposing teams and join one of two game modes available: Team Deathmatch and Kinvader mode.